©2012 – 2015, Michael Mark All Rights Reserved Use of short quotations when referencing any of the articles or content here is permitted.

Love came for me the other night and took me in.  She placed me on her tongue, in the darkness, and let me dissolve until there was nothing left, and she whispered to me all the while about every true thing until I remembered I was the blood in her veins.

I would say to whomever would listen, never forget we are the blood in Love’s veins.  We nourish every part of the great body, and the whole body nourishes us.  Silence is the telling of this.  The wordless, overwhelming joy that inhabits us is all that exists.  It is the whole thing– the blood, the heat, the organs, the chemistry, the mind, the movement, the electricity, the tears. 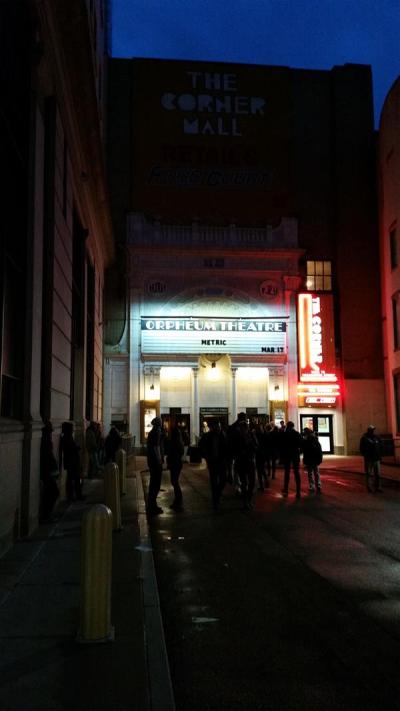 Love came for me the other night to remind me of these things.  To say we are real because we were given Life, and the offer will never be withdrawn, and that makes us the blood in her veins.  At the time, I was standing in the Orpheum Theater.  It was dark in there.  The seats are old velvet that still suck up the light.  They certainly aren’t there for the purpose of sitting.  It’s kind of a joke we shared, we who are the blood and the heat and the glory.  It was neon and trembling and we were gathered close.  It was pulsing and refulgent.

It’s the feeling of clear joy, unfettered, a river of the stuff, flowing through you top to bottom, flowing through the space around you, flowing in every direction until you’re just an awareness bobbing on the tide in the center of your chest, and you can’t tell if the river is flowing through you or you’re the one flowing, a message to all points, and your memories are drifting off with the current, swirling, bumping into others, into the memories of those who are with you—strangers on another night, but not here, now now—and each one of them a humbling gift.  No memory is yours.  No memory is not yours.  And time is nowhere to be found.  Time is doing positive affirmations over in the administrative building, trying to put the pieces back together, pretending this isn’t happening.

The glory of a good show is that you forget stuff.  You forget you were worried, or ashamed, or uncertain.  You forget you have a thought still festering in you like a bad tooth.  You forget the momentum of the previous thirty weeks.  You forget about the needs of tomorrow, and all the crazy things somebody said that still might happen.  And when you forget everything, that’s when you remember the beauty of it all.  When the barriers are down, it all comes flooding back.  That’s when I have this feeling I call Jesus so present to me I can’t tell which of us is which.  We’re just blurred together into one another, and everything else.  That one moment has everything etched upon it.  Truths appear on the walls.  You remember that you’re the blood in Love’s veins.

This year I went to church on St. Paddy’s Day.  It was dark, and we came apart and it was holy.  I wore earplugs.

They closed with this one, and the video does a much better job than I’ve done here of capturing this feeling.  Thanks for a great night, Metric!

This site uses Akismet to reduce spam. Learn how your comment data is processed.